For many years, Ethernet has been the most widely installed network technology for information transport. More recently, Ethernet has begun to support data exchange in systems that were previously the domain of a variety of other networking standards such as EIA/TIA-232 (RS-232) and TIA-485 (RS-485), CAN, HART, and other proprietary communication protocols. The desire to connect every type of device in every type of environment has led to the implementation of Ethernet as the universal transport system across industries and applications. As Ethernet transmission speeds increased, the IEEE recognized the need for additional options to support lower-speed transmission rates for specific applications and environments.

As a result, the most recent addition to the IEEE Std 802.3 standard is the IEEE Std 802.3cg-2019 amendment specifying 10-Mbit/sec transmission over single balanced twisted-pair copper cabling. While initially targeted at industrial and automotive environments, there are also opportunities for building automation functions. This article will examine the network architecture and use cases made possible by the application of this new technology in support of intelligent buildings and the Internet of Things (IoT).

It may surprise commercial building network managers, but standards for single-pair Ethernet (SPE) have been in place for many years. The first two published SPE standards (IEEE Std 802.3bw and IEEE Std 802.3bp), operating at 100 Mbits/sec and 1,000 Mbits/sec respectively, were specifically targeted for the automotive market. Automotive applications have a well-defined (and small) area to support, so the reach was limited to 15 meters (100Base-T1) or 15 and 40 meters (1000Base-T1).

However, IEEE 802.3 recognized the need to support single-pair Ethernet connections at much greater distances in industrial environments. To enable the longer cable runs required for industrial applications, the IEEE 802.3cg amendment provides for 10-Mbit/sec transmission at a reach of up to 1,000 meters (10Base-T1L), as well as supporting 15-meter link segment (10Base-T1S) for automotive and industrial cabinet environments. There is also an optional 25-meter “multidrop” configuration that allows for up to eight devices to be connected in a single “mixing segment.” The mixing segment implementation will be an engineered system and is not intended to be preinstalled as structured cabling.

These industrial environments operate using machine-to-machine (M2M) communication that typically occurs between low-complexity components commonly found in control and automation systems. The fieldbus devices in these systems include sensors that can detect light, heat, motion, moisture, pressure, or any other environmental phenomena and respond with information or an instruction. They also include actuators that can move or control a mechanism such as a valve, light, or an electrically controlled switch used for opening or closing a power circuit (e.g., a disconnect, relay, or contactor). These systems have been moving from older, proprietary communication protocols to Ethernet networks and the new SPE standard provides a seamless migration path to ensure interoperability between diverse systems and system vendors.

Similarly, many of the controls, sensors, systems, and devices used in an intelligent building—often referred to as the building’s operational technology (OT)—that operate over BACnet or other proprietary fieldbus communication systems may soon have the ability to be connected through the use of an SPE network. The Building Internet of Things (BIoT) provides a degree of automation, intelligence, and system integration that enables a variety of benefits for the buildings’ owners and occupants. Although this new single-pair network will be an Ethernet based system and could be connected to the building’s business local area network (LAN) if the 10Base-T1L signal is converted to 10/100/1000Base-T, the two systems are often under the purview of different system managers. It may be that the single-pair OT network will be operated and managed separately initially, but eventually the information technology (IT) and OT networks will need to converge in a similar manner to what occurred with voice and data networks. Convergence allows for the full benefits of the smart building systems to be realized.

To support this new single-pair Ethernet network technology, the TIA TR-42 Telecommunications Cabling Systems Engineering Committee has undertaken the work to develop new SPE cable, connector, and channel performance specifications. The TR-42.7 Telecommunications Copper Cabling Systems Subcommittee is developing ANSI/TIA-568.5 for the purpose of defining the cable and channel transmission performance characteristics needed to support the 10Base-T1L application defined by IEEE 802.3cg. The TIA standard is in the early process of ballot review, with draft content subject to change, and currently defines two channel configurations. One variant (SP1-400) supports a maximum 400-meter reach with up to 5 connections. The number of connectors in the channels are aligned with the recommendations of the IEEE P802.3cg 10-Mbit/sec Single Pair Study Group, whose members recognized early on that long links consisting of large, heavy fieldbus cables are usually split into shorter segments and connected using field junction boxes.

Single-pair Ethernet cabling designs for the SP1-1000 and SP1-400 channels may be shielded or unshielded. Allowable cable conductor size ranges from 18 AWG to 26 AWG, depending on the application and the power class being deployed. TIA has created specifications for SP1-1000 cable and channels that will likely use 18-AWG conductors to achieve the maximum reach. SP1-400 cable and channel specifications will likely use 23-AWG conductors. 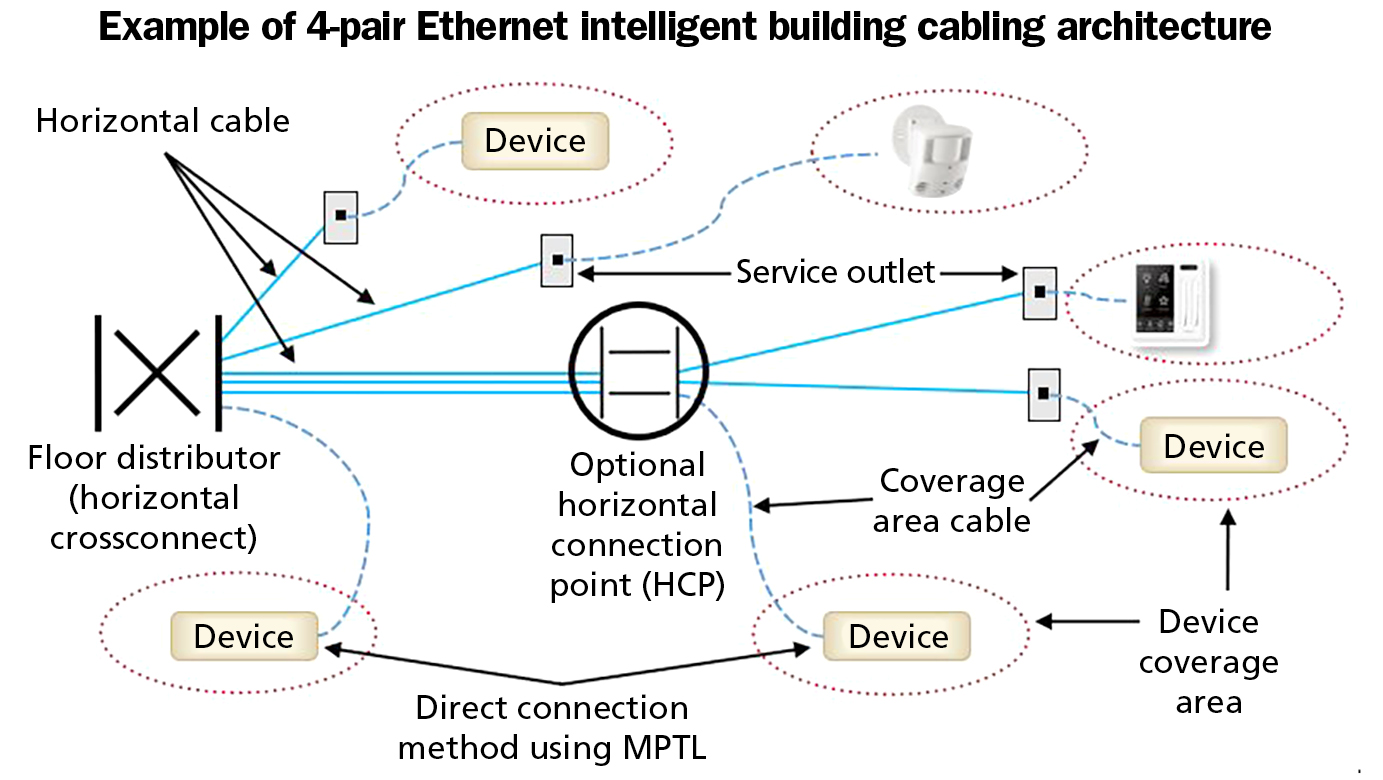 ANSI/TIA-862-B and BICSI 007 include network topology for 4-pair cabling that encourages the use of a zone cabling architecture and horizontal connection points. This topology could be well-suited to single pair Ethernet. This illustration is derived from the BICSI 007 standard.

Read the rest of the article on Cabling Installation & Maintenance.